Scythians(see my blog post),Sogdians (see my blog post), Sasanians (see my blog post Civilizations),  are all words for the peoples of Central Asia (the stans) of Greater Iran are often These peoples have collectively characterized as having been “Zoroastrian” in pre-Islamic times, but in actual hisory, there was an ever-changing mix of local and non-local religious beliefs and practices, drawn largely but not exclusively from an Iranian pool of myths, deities, symbols and rituals.

The Persian-speaking Tajik minorities of Central Asia, who still form the majority of the population in the picturesque Silk Route cities of Samarkand and Bukhara, are living witnesses to the Iranian presence in the heart of Asia which dates back to prehistoric times. Before the beginning of our era, nomadic Iranian Saka tribes, whom the Greeks called Scythians, roamed the Asian steppes as far east as Mongolia, and well into the Islamic period the merchant Sogdians of Transoxiana – who were also Iranians – plied the caravan routes which linked the Mediterranean world with China.

Today, Zoroastrianism is having a revival amongst Iranians who want to express discontent towards the dictatorial theocratic regime and with Iraqi Kurds who wish to go back to their roots.  In other cases in Iran and Iraq, their numbers are decreasing due to government pressure.

“Converting back” to Zoroastrianism, as many refer to the process of rediscovering their roots, has encouraged a view of Islam as an alien Arab faith that was imposed on unwilling Persians during the Muslim conquest of the seventh century. 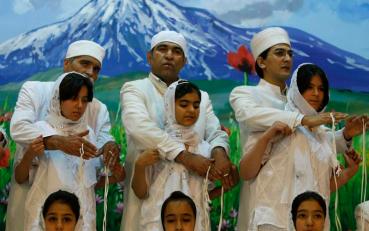 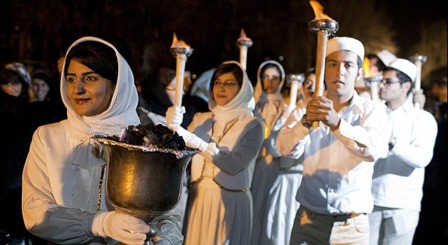 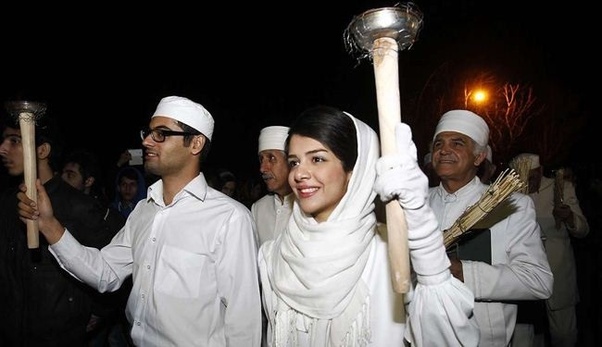 Sometime during the third millennium BCE, Indo-Aryan peoples moved southward from the Eurasian steppe to the Iranian plateau, leaving amongst their legacies the name “Iran”, which is etymologically derived from “Aryan”. They brought with them elements of ancient Indo-European belief and ritual,.

Early in the first millennium before our era, the prophet Zoroaster (Zarathrushtra), who probably lived within the pastoral society of what is now Khurasan in Iran and Afghanistan, made an effort to reform the religious practices of his people. A full thousand years or more later, during the rule of the Sasanian emperors, the religion known today as Zoroastrianism was codified and formalized as the official state-sponsored religion of the empire.

The Sasanians, like the earlier Persian Achaemenid emperors (See my blog post) of the fifth century BCE, were able to incorporate into their empire the Iranian-inhabited lands of Central Asia with their lucrative east-west trade routes.

During the intervening centuries of Greek Seleucid then Kushan rule, Bactria (roughly, present-day Afghanistan) had become heavily influenced by Buddhist ideas and practices. When state-sponsored Zoroastrianism emanating from the Sasanian power centers of southwestern Iran began to assert itself towards the east and northeast during the fifth and sixth centuries CE, there nfluence may have resulted in a “reverting” of Central Asia to its previous religion, but scholars are not quite sure.

In the past, it was assumed the various Iranian peoples of “greater Iran” – a cultural area that stretched from Mesopotamia and the Caucasus into Khwarazm, Transoxiana, Bactria, and the Pamirs and included Persians, Medes, Parthians, and Sogdians, among others – were all “Zoroastrian” in pre-Islamic times, but modern scholarship is more nuanced.

Zoroastrianism,  or Mazdayasna, is one of the world’s oldest religions that remains active. It is a monotheistic faith with a single creator,  centered in a dualistic cosmology of good and evil and an eschatology predicting the ultimate destruction of evil.

Ascribed to the teachings of the Iranian-speaking prophet Zoroaster (also known as Zarathustra as in thus spake) it exalts a deity of wisdom, Ahura Mazda (Wise Lord), as its Supreme Being.

Major features of Zoroastrianism, such as messianism, judgment after death, heaven and hell, and free will have influenced other religious systems, including Judaism, Gnosticism, Christianity, and Islam.

With possible roots dating back to the second millennium BCE, Zoroastrianism enters recorded history in the 5th-century BCE.  Along with a Mithraic Median prototype and a Zurvanist Sassanid successor, it served as the state religion of the pre-Islamic Persian(Iranian) empires for more than a millennium.

Zoroastrianism was suppressed from the 7th century onwards following the Muslim conquest of Persia of 633–654.  Recent estimates place the current number of Zoroastrians at around 190,000, with most living in India and in Iran; their number is declining.  In 2015, there were reports of up to 100,000 converts in Iraqi Kurdistan.Besides the Zoroastrian diaspora, the older Mithraic faith Yazdânism is still practised amongst Kurds.

The most important texts of the religion are those of the Avesta, which includes the writings of Zoroaster known as the Gathas, enigmatic poems that define the religion’s precepts, and the Yasna, the scripture.

The full name by which Zoroaster addressed the deity is: Ahura, The Lord Creator, and Mazda, Supremely Wise. The religious philosophy of Zoroaster divided the early Iranian gods of Proto-Indo-Iranian tradition, but focused on responsibility, and did not create a devil per-se.

Zoroaster proclaimed that there is only one God, the singularly creative and sustaining force of the Universe, and that human beings are given a right of choice. Because of cause and effect, they are responsible for the consequences of their choices. The contesting force to Ahura Mazda was called Angra Mainyu, or angry spirit. Post-Zoroastrian scripture introduced the concept of Ahriman, the Devil, which was effectively a personification of Angra Mainyu.

Zoroastrianism’s creator Ahura Mazda, through the Spenta Mainyu (Good Spirit, “Bounteous Immortals”) is an all-good “father” of Asha (Truth, “order, justice”),  in opposition to Druj(“falsehood, deceit”) and no evil originates from “him”.  “He” and his works are evident to humanity through the six primary Amesha Spentas and the host of other Yazatas, through whom worship of Mazda is ultimately directed. Spenta Mainyu adjoined unto “truth”,  oppose the Spirit’s opposite,  Angra Mainyu and its forces born of Akəm Manah (“evil thinking”).

Zoroastrianism has no major theological divisions, though it is not uniform; modern-era influences having a significant impact on individual and local beliefs, practices, values and vocabulary, sometimes merging with tradition and in other cases displacing it.  In Zoroastrianism, the purpose in life is to “be among those who renew the world…to make the world progress towards perfection”. Its basic maxims include:

My favorite Bible Verse is Luke 6:38.  I have not read that there is a direct connection between the Zoroastrians and this verse, but I do know many ideas in Judaism, Christianity and Islam were invented by the Zoroastrians so it seems likely to me that Luke 6:38 is too.

Luke 6:39 New International Version  – Give, and it will be given to you. A good measure, pressed down, shaken together and running over, will be poured into your lap. For with the measure you use, it will be measured to you.”

The Religion that the Iranian Mullahs Fear Most – Zoroastrians.net – Parsis, Iranis, Zarathushtis, All Under One Roof