The main highway runs from the Chinese border at Torugart Pass north to Balykchy on Issyk Kul Lake. It is known as the location of Song Kol Lake  (See below) and Chatyr-Kul Lake and Tash Rabat.

The population of Naryn oblast is 99% Kyrgyz. The economy is dominated by animal herding (sheep, horses,yaks), with wool and meat as the main products.  Today the region is considered to be the poorest region in the country, but also the most typically Kyrgyz. It boasts beautiful mountains, alpine pastures and Son-Kul Lake which during summer months attracts large herds of sheep and horses with their herders and their yurts

Naryn on the Silk Road

From Naryn, the main road (one of the branches of the ancient Silk Road) runs south through the sparsely settled central Kyrgyz highlands to the Torugart Pass and China. At present, this is the main transport link from Kyrgyzstan to China.

Tash Rabat is a well-preserved 15th century stone caravanserai in At Bashy district, Naryn Province, Kyrgyzstan located at an altitude of 3,200 meters (10,500 feet)  It is located somewhat east of the main north-south highway. To the south is Lake Chatyr-Kul and Torugart Pass. To the north is Koshoy Korgon, a ruined fortress of uncertain date.

It was an inn for merchants and travelers of the legendary Silk Road from Central Asia to China. Due to its remoteness, scenery and very few tourists it’s not so difficult to step back through history and imagine the original atmosphere. 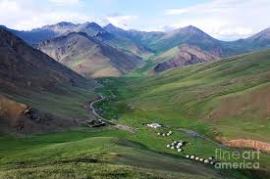 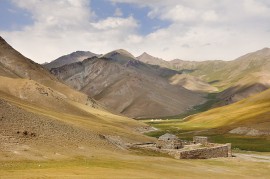 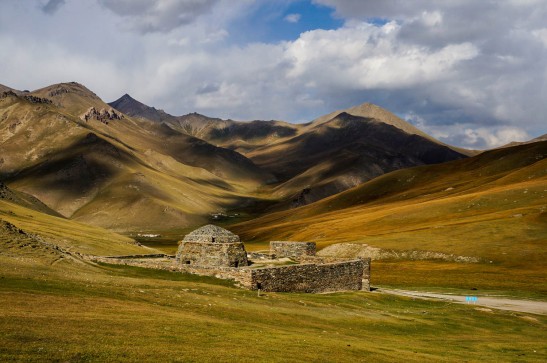 As early as 1888, Russian doctor and traveler Nicolay Lvovich Zeland suggested that it was originally a Nestorian or Buddhist monastery.[1] Research undertaken at the end of the 1970s and beginning of the 1980s by the Institute of History of the Kyrgyz Academy of Sciences concluded that Tash Rabat was originally built as a Nestorian monastery in the 10th century, although no Christians artifacts were found during excavations.

While it doesn’t look very imposing from outside, the structure goes underground and has 31 rooms

The area is a center for hiking and horse-trekking in the summer months.  In the winter it gets cold!!! 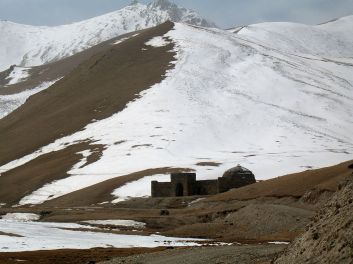 The caretakers of Tash Rabat offer lodging, consisting of 5 or 6 yurts

At the Torugart Pass  you will be able to look east and to see China. The road that you are traveling on is the actual Silk Road.    Naryn Province of Kyrgyzstan and the Xinjiang Autonomous Region of China.

The scenic Lake of Chatyr-Kul lies near the pass on the Kyrgyz side. The road to Naryn and then to Balykshy and Bishkek—stretching for some 400 km (250 mi)—is narrow and in winter often impassable due to heavy snowfall and frequent avalanches. On the Chinese side, the Torugart Port of Entry , where travelers must clear for customs, is located about 110 km (68 mi) from the pass itself in Ulugqat County of the Kizilsu Kirghiz Autonomous Prefecture.  It is 165 km (103 mi) to Kashgar, 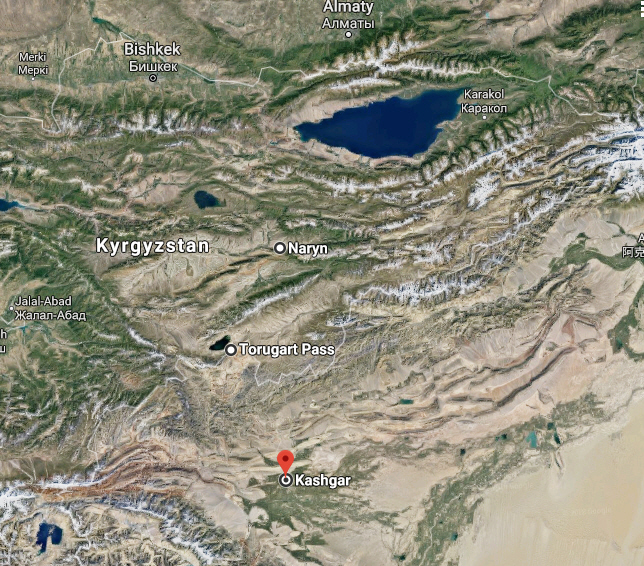 The pass was used since antiquity. During the Han dynasty it was under the jurisdiction of a micro-state called Juandu (捐毒国). During the Tang dynasty, the region came under Tang control as part of Anxi Protectorate

Russia and China first established a port of entry at the Torugart Pass in 1881. In 1906, Russia’s Sino-Russian Transport Bank financed the construction of the road from the pass to Kashgar for 20 million rubles. In 1952, the Torugart Pass replaced the Irkeshtam Pass, which lies some 165 km (103 mi) southwest, as the primary overland link between Xinjiang and the then-Soviet Kyrgyz Republic. The pass was closed in 1969 due to the Sino-Soviet Split and reopened again in 1983. In 1995, the Torugart Port of Entry was relocated to a lower elevation (2,000m), closer to Kashgar, some 57 km (35 mi) away.

The pass is open to all nationalities but clearance requires careful arrangement of transportation.

A China-Kyrgyzstan-Uzbekistan railway going through Torugard Pass has been in the works that would connect Kashgar and the Ferghana Valley since 2012.  However, the Kyrgyz section of the rail has been stalled due to financial and technical issues
h1>Things to See in Naryn

Naryn is the regional administrative center of the region,  It is a small town (population 34,822 in 2009) and  is situated on both banks of the Naryn River (one of the main head waters of the Syr Darya), which cuts a picturesque gorge through the town. The city has two regional museums and some hotels, but is otherwise residential.

Naryn hosts one of three campuses of the University of Central Asia (UCA). The University was founded in 2000 by the governments of Kazakhstan, the Kyrgyz Republic and Tajikistan, and His Highness the Aga Khan  (the 49th and current Imam of Nizari Ismailism, a denomination of Isma’ilism within Shia Islam consisting of an estimated 10-15 million Shia adherents The Aga Khan is a British business magnate as well as a racehorse owner and breeder.  UCA is the world’s first internationally chartered institution of higher education.  ands (UCA) Naryn, Kyrgyz Republic campus commenced on 5 September 2016.

Salkyn Tor National Park is a short drive from Naryn and good for families to get out of town for a few hours and have picnics, play,  hike and enjoy nature,  The 10,448 acres park itself is a place for picnic for locals during weekends.  It is Naryn city residents; favorite, especially at the end of the school when there is a tradition for  entire schools to camp out.  Don ‘t miss the Love Bridge where Kyrgyz couples get engaged.

The park was founded to preserve some rare species  and has a lot to offer apart from amazing beauty — caves (with bats), hills, gorges and hot springs.

The picnic area at the entrance is the start point for a beautiful trek that goes all the way to the alpine lake if 2 days trek.  The initial hike up the mountain is  pretty moderate  with a gentle incline and incredible views throughout. There are a few spots where you have to cross rivers and remove shoes, but otherwise it’s a very relaxing hike. 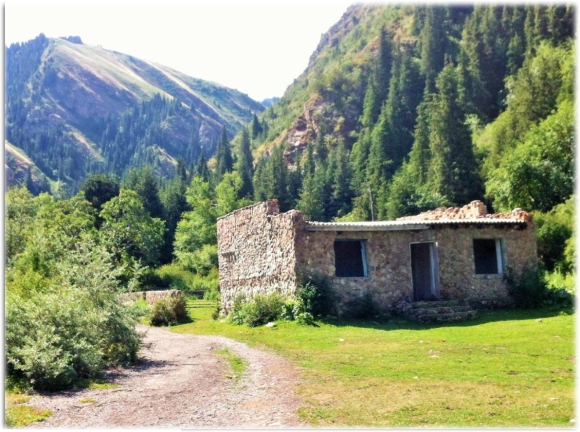 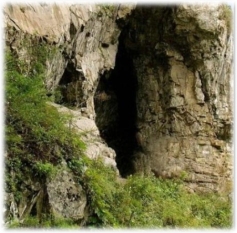 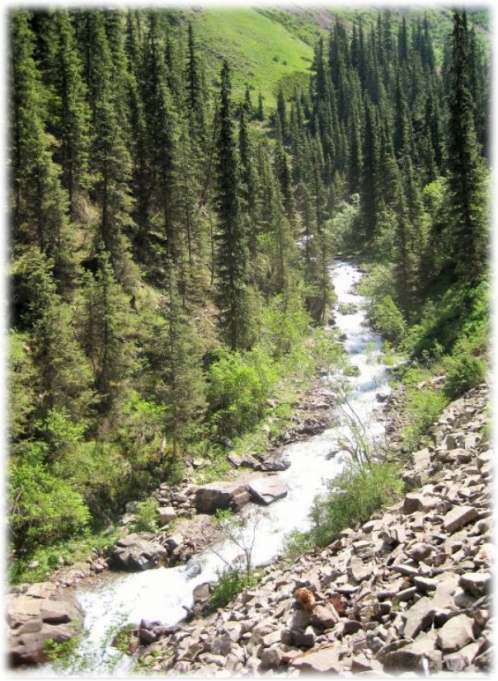 Chatyr-Kul is an endorheic  alpine lake in the Tian Shan mountains in At-Bashi District of Naryn Province.  The salinity of the lake is 2 ppt (compared to 300 – 350 for the Dead Sea and 35ppt  for the Ocan and the average river water salinity is 0.5ppt or less) .

It lies in the lower part of Chatyr-Kul Depression near the Torugart Pass border crossing into China. The name of the lake means “Celestial Lake” in Kyrgyz (literally “Roof Lake”).

The lake and 2 km buffer zone around it is part of the Karatal-Japyryk State Nature Reserve. The lake is a Ramsar site of globally significant biodiversity . 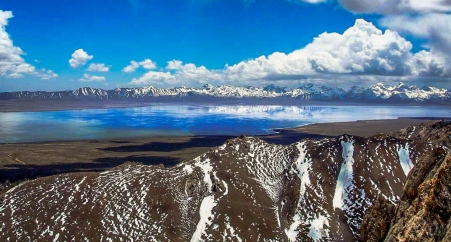 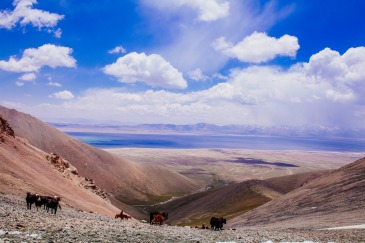 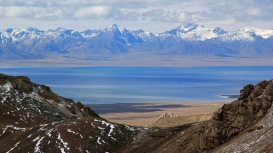 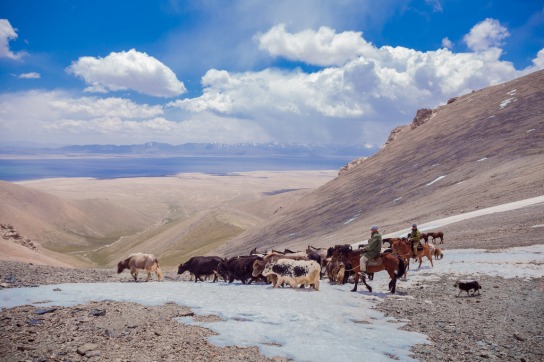