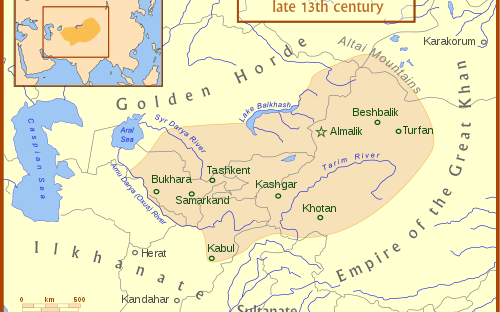 Mongol Empire (1206–1240s CE) Genghis Khan united the Mongol tribes of the steppes and became Great Khan in 1206. Genghis Khan and his successors expanded the Mongol empire across Asia. Under the reign of Genghis' third son, Ögedei Khan, the Mongols destroyed the weakened Jin dynasty in 1234, conquering most of northern China.[ Ögedei offered… END_OF_DOCUMENT_TOKEN_TO_BE_REPLACED

The Sintashta culture is widely regarded as the origin of the Indo-Iranian languages. The earliest known chariots have been found in Sintashta burials, and the culture is considered a strong candidate for the origin of the technology, which spread throughout the Old World and played an important role in ancient warfare.  Sintashta settlements are also remarkable for the intensity of copper mining and bronze metallurgy carried out there, which is unusual for a steppe culture

Evidence of wheat, copper and millet gives clues to the first connections between West and East were made in the Bronze Age and archaeologists are finding clues of the specific routes that were taken. A current best guess is for a steppe connection at the beginning of the third millennium BC (3000 BCE) and a ‘silk road’ connection at the end of the 3rd millennium (2000 BCE).  However, a much earlier connection (the sixth millennium BC) is still arguable