Traditional Kyrgyz food revolves around mutton, beef (the favorites) and also horse meat and various dairy products. The preparation techniques and major ingredients have been strongly influenced by the nation’s historically nomadic way of life. Thus, many cooking techniques are conducive to the long-term preservation of food.

Kyrgyzstan is home to many different nationalities and their various cuisines. In larger cities, such as Bishkek, Osh, Jalal-Abad, and Karakol, various national and international cuisines can be found. Non-Kyrgyz cuisines that are particularly common and popular in Kyrgyzstan include Uyghur, Dungan, Uzbek, and Russian cuisines, representing the largest minorities in the country

Beshbarmak is the Kyrgyz national dish, although it is also common in Kazakhstan and in Xinjiang (where it is called narin). It consists of horse meat (and sometimes mutton or beef) boiled in its own broth for several hours and served over homemade noodles sprinkled with parsley and coriander. Beshbarmak means “Five Fingers” in the Kyrgyz language, and is so called probably because the dish is typically eaten with the hands.

Beshbarmak is most often made during a feast to celebrate the birth of a new child, an important birthday, or to mourn a death in the family, either at a funeral or on an anniversary. If mutton is used instead of horse meat, a boiled sheep’s head is placed on the table in front of the most honored guest, who cuts bits and parts from the head and offers them around to the other guests at the table

Charcoal-grilled skewered meat, which they call by the Russian word shashleek. These are cooked over a long, narrow trough of charcoal, an unusual sight here, but a more common occurance in Central Asia

Kuurdak is one of the main and oldest dishes in Kyrgyz cuisine. Kuurdak is usually made from mutton, fat and onion, it can be made using beef or any other kind of meat except pork.  Authentic kuurdak is made from sheep’s liver, kidney, heart and lungs.

The Kuurdak name comes from a nominalisation of the word “roast”, “fried”, referring to how the food is made. It is described as “stewed brown meat”

Boorsok is a type of fried dough mixture that is popular in the cuisines of Central Asia eastwards to Mongolia. It is simple to make but there is a lot of variation in its preparation and design, leaving a lot of room for creativity for the adventuruous chefs among you.

Krygyz families often make Boorsok for holiday celebrations and it is served at the important family events: births, marriages and wakes. 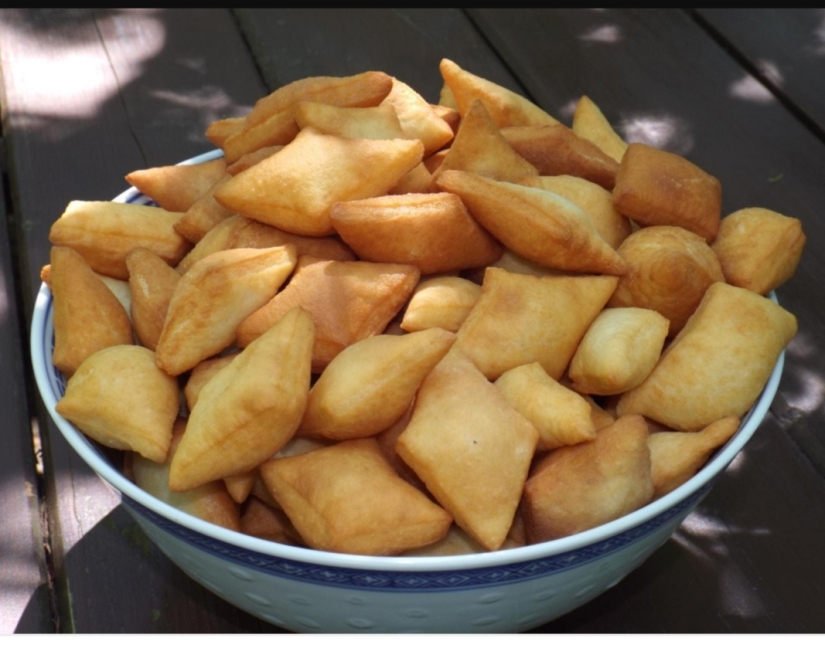 Having an abundance of this tasty snack is a sign of generosity on the part of the host whilst its absence would be a source of shame. This is especially true during major celebrations where the boorsok are piled high and wide across the dastorkan (tablecloth).

They can be eaten as a dessert, when typically served with honey, currents, dates,.  jam, powdered sugar or butter, or as a side dish to the main meal. They can also be made sweet or savoury depending on the sugar and salt levels used in the cooking process. Furthermore, it is not uncommon for boorsok to be served with tea as a kind of dipping biscuit.

Manty are steamed dumplings filled with ground meat and onions. 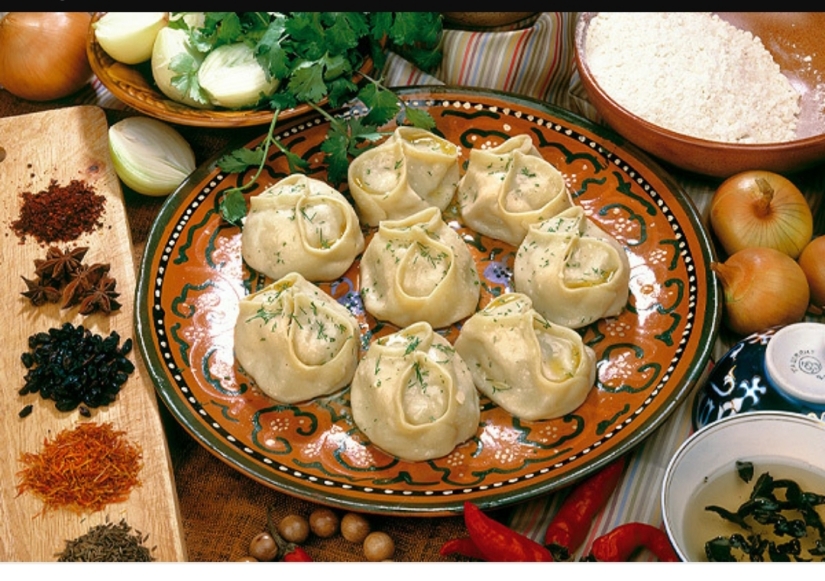 Samsa are little pockets with meat and vegetables wrapped in flaky pastry or bread, very similar to Indian samosas. They are most often stuffed with mutton and fat, but are also made with chicken, cheese, cabbage, beef, and even pumpkin. They can be bought in most bazaars or on street corners in larger cities.

Lagman (or laghman) is a very popular noodle dish. It consists of thick noodles created by stretching a very simple flour dough, then covered in chopped peppers and other vegetables and served in a spicy vinegary sauce. Lagman is served everywhere in Kyrgyzstan, but is considered a Dungan or Uyghur dish.

Kyrgyzs drink tea and eat tasty bread for social ocassions.   Bread is valued as sacred in Kyrgyz culture, and a good host always offers a guest bread at the very least (often with tea), even if the guest is only staying for a few moments.

The Kyrgyz often eat various breads by dipping it in jam,kaymak, butter (or sary may), etc. Boorsoq is sometimes eaten suspended in tea, or dipped in honey.

Central Asian flat bread is cooked over coals in tandoori (Kyrgyz: тандыр [tɑndɯr]) ovens, and is round and relatively flat.

Kymyz is a slightly alcoholic drink made by fermenting mare’s milk. This drink is considered to be the signature drink of Euroasian nomadic culture, as it is also consumed in Kazakhstan and Mongolia. Fresh kymyz is only available in the summer, from about May until August, when it can commonly be purchased by the roadside in mountainous areas. Bottled kymyz is also available year-round in most food shops in the country.

Maksym is a slightly fizzy drink made by fermenting grains and is especially popular in the summer.   Maksym was traditionally made in small quantities by women for family consumption; however, this drink was introduced as a commercial product in Bishkek by the company ‘Shoro‘, after which it became widely available all over Kyrgyzstan.

Maksym is usually made from malt, but other types of grains may be used in its preparation. There are different methods and recipes for it which vary by region. It is prepared by boiling grounded malt or other type of cereals in water. After reaching a certain state of readiness this substance is cooled and undergoes a fermentation process caused by yeast. Maksym is usually consumed chilled.

Jarma is a similar drink derived from ground cereals. It is made in almost the same way as maksym, except that it isn’t fermented, instead it is mixed with ayran to make it slightly fizzy.

Chalap is another fizzy drink made from aryan. Other traditional drinks are sheep’s milk and its products (such as qurut) and camel’s milk. The two primary companies which commercially produce Kyrgyz national drinks are Shoro and Enesay.  Bozo is slightly alcoholic drink prepared from wheat

Sources and More to See

How to Make Boorsok – A Tasty Kyrgyz Snack – hitchhikershandbook.com