Bishkek is a city of trees. It has had its name for 27 years since 1991 when Kyrgystan declared indepedence from the Soviet Union, renamed the city and declared it as the capital of the Kyrgyz Republic.  It was formerly called Pishpek and Frunze.  Bishkek is a modern city and was not established in the Age of then Ancient Silk Road.   It is a convenient home base for exploration. 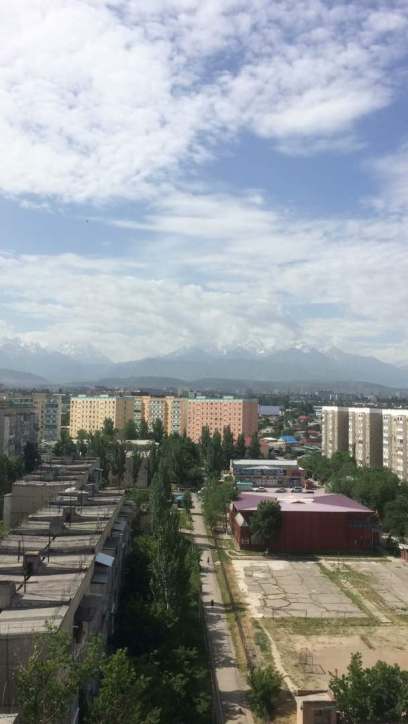 Bishkek is a green city of trees at the foot of snow capped mountains.

Bishkek is situated at an altitude of about 800 meters (2,600 ft), just off the northern fringe of the Kyrgyz Ala-Too range, an extension of the Tian Shan mountain range. These mountains rise to a height of 4,855 meters (15,928 ft) and provide a spectacular backdrop to the city. North of the city, a fertile and gently undulating steppe extends far north into neighboring Kazakhstan. The Chui River drains most of the area

Caravans were modern commerce as recently as the 20th century and Bishkek goes back to 1825 when Kokand authorities established the fortress of “Pishpek” in order to control local caravan-routes and to collect tribute from Kyrgyz tribes. On 4 September 1860, with the approval of the Kyrgyz, Russian forces led by Colonel Zimmermann destroyed the fortress. In 1868 a Russian settlement was established on the site of the fortress under its original name, “Pishpek”. It lay within the General Governorship of Russian Turkestan and its Semirechye Oblast.

In 1925 the Kara-Kirghiz Autonomous Oblast was established in Russian Turkestan, promoting Pishpek to its capital. In 1926 the Communist Party of the Soviet Union renamed the city as Frunze, after the Bolshevik military leader Mikhail Frunze (1885–1925), who was born there. In 1936, the city of Frunze became the capital of the Kirghiz Soviet Socialist Republic, during the final stages of the national delimitation in the Soviet Union.  Kyrgystan declaring independence from the Soviet Union on 31 Aug 1991 and parliament changed the capital’s name to “Bishkek”.

Things to See in Bishkek

Ala_Too Square is center of social life in Bishkek, come stroll with the local people on a warm summer evening. It is surrounded by other important attractions, and you can enjoy all of their celebrations, national festivals and entertainments  from the benches and beautiful water fountains in the square. 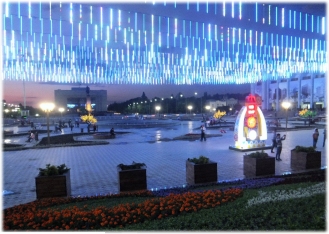 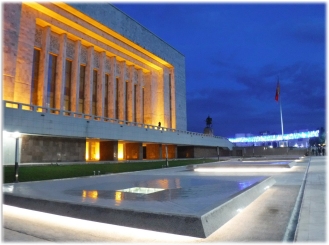 In the government building area not far from the Panfilov Park amusement area is Ala-Too Square. It is very large, not a bad spot to get some pictures, see the giant flag and watch the world go by. 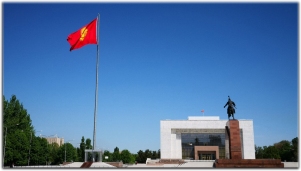 This square with a huge fluttering flag is a happening place with activities for all ages. Children love playing around and people of all ages can take various rides and spend a good time there,

Dordoy Bazaar  is one of Asia’s greatest public market places, comparable to Bangkok’s Chatuchak weekend market or Tehran’s Grand Bazaar. It has been described by a Western journalist as “a modern monument to the power of raw commerce”.

Dordoy Bazaar is a major shopping and employment centre for the Bishkek metropolitan area and entire Chuy River Valley region. It is also one of the main entrepots through which consumer goods from China arrive at shops and markets in Kazakhstan, Russia, and Uzbekistan.  According to some economists, this re-export (the other center for which, targeting Uzbekistan, is the Karasuu Bazar at Kara-Suu, Osh Province) is one of two largest economic activities of Kyrgyzsta

Two large plazas near the northern and southern ends of the market are connected by frequent minibus (Marshrutka) service with central Bishkek. From the northern plaza, minibuses also run to various points throughout Chuy Province, including Sokuluk, Kant, Tokmok, and Korday border crossing (on the Kazakhstan border). For the convenience of the “shuttle traders”, charter buses run from Dordoy to several major cities in Kazakhstan and in Russia’s Urals and Western Siberia.

The Dordoy market stretches for more than a kilometer on the north-eastern outskirts of Bishkek, near the bypass highway that skirts the city in the north. Legally, it is an agglomeration of several independent markets adjacent to each other. Since there are no fences, the borders between the markets are not particularly noticeable. According to a 2007 city atlas,  the component markets are:

Most of the market is built of double-stacked shipping containers. Typically, the lower container is a shop, while the upper one provides storage. According to a 2005 newspaper report, there were 6,000 to 7,000 containers in the bazaar. Approximately 20,000 people worked there (as vendors, security, service personnel).[5]

The containers, organized in dozens of rows, form streets and plazas of a sort. Smaller buildings between the blocks of containers house restaurants, administrative offices, toilets, hotels, and other ancillary structures.

Different sections of the markets specialize in various types of consumer goods, including clothing, shoes, furniture, electric and electronic equipment, toys, automotive supplies, construction materials, etc. While some kinds of groceries (e.g. factory-packaged canned goods or sweets) are sold at Dordoy, it is not a produce market. Occasional produce vendors are present merely to feed the vendors and customers.

Most of the goods sold at Dordoy arrive from China, with the second largest source (perhaps 30% of all imports) being Turkey.   One can also find clothing from Thailand and Europe, music CDs from Russia, and goods from many other countries in Eurasia, as well as a selection of local products.

Although many of the people working and shopping at the Bazaar speak Kyrgyz,  Russian is the main language used in trade.