Tajikistan  is a mountainous, landlocked country in Central Asia with an estimated population of 8.7 million people as of 2016, and is about the size of the state of New York (55.300 vs 54,500  square miiles.)  Mountains cover more than 90% of the country.  It is bordered by Afghanistan to the south, Uzbekistan to the west,Kyrgyzstan to the north, and China to the east. Most of Tajikistan’s people belong to the Tajik ethnic group, who speak Tajik (a dialect of Persian). Many Tajiks also speak Russian as their second language

Tajikistan declared independence on September 9  1991 and fought between 1992 and 1997,  since then, it has been peaceful, the economy is growing and it is now a safe place to visit, though it has been critized internationally for civil rights violations.

The Pamir Mountain Range, covers more than 90% percent of the country is over 3,000 metres (9,800 ft) above sea level. The only major areas of lower land are in the north (part of the Fergana Valley), and in the southern Kofarnihon and Vakhsh river valleys, which form the Amu Darya. Dushanbe is located on the southern slopes above the Kofarnihon valley.

Tajikistan and the Silk Road

The territory that now constitutes Tajikistan was previously home to several ancient cultures, including the city of Sarazm of the Neolithic and the Bronze Age, and was later home to kingdoms ruled by people of different faiths and cultures, including the Oxus civilisation,Andronovo culture, Buddhism, Nestorian Christianity, Zoroastrianism, Manichaeism and Islam.

Cultures in the region have been dated back to at least the 4th millennium BCE, including the Bronze Age Bactria–Margiana Archaeological Complex, the Andronovo cultures and the pro-urban site of Sarazm, a UNESCO World Heritage site.

After the region’s conquest by Alexander the Great it became part of the Greco-Bactrian Kingdom, a successor state of Alexander’s empire. Northern Tajikistan (the cities of Khujand and Panjakent) was part of Sogdia, a collection of city-states which was overrun by Scythians and Yuezhinomadic tribes around 150 BCE.

The Silk Road passed through the region and following the expedition of Chinese explorer Zhang Qian during the reign of Wudi (141–87 BCE) commercial relations between Han China and Sogdiana flourished.  Sogdians played a major role in facilitating trade and also worked in other capacities, as farmers, carpetweavers, glassmakers, and woodcarvers.

The Kushan Empire, a collection of Yuezhi tribes, took control of the region in the first century CE and ruled until the 4th century CE during which time Buddhism, Nestorian Christianity, Zoroastrianism, and Manichaeism were all practised in the region.  Later the Hephthalite Empire, a collection of nomadic tribes, moved into the region and Arabs brought Islam in the early eighth century.   Central Asia continued in its role as a commercial crossroads, linking China, the steppes to the north, and the Islamic heartland.

It was temporarily under the control of the Tibetan empire and Chinese from 650–680 and then under the control of the Umayyads in 710. The Samanid Empire, 819 to 999, restored Persian control of the region and enlarged the cities of Samarkand and Bukhara (both cities are today part of Uzbekistan) which became the cultural centres of Iran and the region was known as Khorasan. The Kara-Khanid Khanate conquered Transoxania (which corresponds approximately with modern-day Uzbekistan, Tajikistan, southern Kyrgyzstan and southwest Kazakhstan) and ruled between 999–1211.[17][18] Their arrival in Transoxania signalled a definitive shift from Iranian to Turkic predominance in Central Asia, but gradually the Kara-khanids became assimilated into the Perso-Arab Muslim culture of the region

During Genghis Khan‘s invasion of Khwarezmia in the early 13th century the Mongol Empire took control over nearly all of Central Asia. In less than a century theMongol Empire broke up and modern Tajikistan came under the rule of the Chagatai Khanate. Tamerlanecreated the Timurid dynasty and took control of the region in the 14th century.

The Buddhist monastery Ajina Tepe, which dates back to the 7th and 8th centuries, is located in the Vakhsh Valley in Southern Tajikistan, one km north of the ruins of an early medieval town now known as Chorgul Tepe.

Ajina Tepe can be directly translated as “the Devil’s hill” or “the Hill of Evil Spirit” most likely due to local resident’s perception of unattractiveness surrounding the earthen site. Before the archeological excavation in 1961 and 1975 led by scientist Boris A. Litvinskii, the site was considerably damaged first due to the Arab conquest of the region and second, to the decades of neglect after the excavation carried out in Soviet times and so was in dire need of urgent consolidation work.

As a result, the fifty by a hundred meter mound covering the ruins of the Buddhist monastery was subjected to intense excavation carried out by the joint expedition of the Institute of Oriental Studies of the Academy of Sciences of the USSR, the State Hermitage, and the Academy of Sciences of the Tajik SSR. The interiors of many chambers as well as the monastery itself were richly covered with decorative paintings, most of Indian element and local traditions of ancient Tokharistan.

Archeologists discovered 500,000 artifacts which included sculptures, bas-reliefs, wall painting fragments, etc. But the most sensational of these is a 12-meters height clay statue figure of Buddha found in one of the eastern corridors, now displayed in the Tajikistan National Museum of Antiquity in Dushanbe.  It is the biggest sculpture of Buddha found in modern Central Asia. 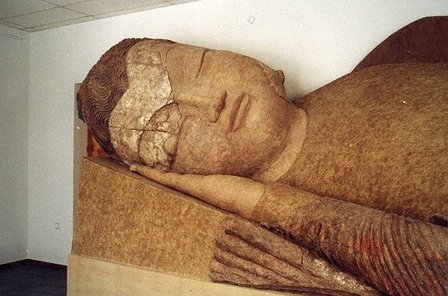 Things to See in Tajikistan

This trip is easily accessible from Osh.

The peak rises to 7,134 metres (23,406 ft) in Gorno-Badakhshan (GBAO) on the border of Tajikistan and Kyrgyzstan, and is the second-highest point of both countries.  It is the highest mountain in the Trans-Alay Range in Kyrgzstan, and in the Pamir Mountains in Tajikistan it is exceeded only by Ismoil Somoni Peak (7,495 m).

It is considered one of the less technical 7000 m peaks in the world to climb and it has by far the most ascents of any 7000 m or higher peak on Earth, with every year seeing hundreds of mountaineers make their way to the summit.

in October 2017, Kyrgyz president Almazbek Atambayev called for renaming the peak “Manas Peak”, after the hero of the Epic of Manas. A peak named “Manas Peak” already exists in Kyrgyzstan; it is a mountain of 4,488 metres (14,724 ft) in the Talas Alatau range in Talas Region

There are 16 established routes, nine on the southern side and seven on the northern slopes. The peak is quite popular with climbers due to its easy access and some uncomplicated routes. However, the peak is not without its share of disasters. In 1974, an entire team of eight female climbers died high on the mountain in a storm

The lower reaches -provide beautiful hiking for every athletic ability.