Bukhara is located on the Silk Road, the city has long served as a center of trade, scholarship, culture, and religion. UNESCO has listed the historic center of Bukhara (which contains numerous mosques and madrasas) as a World Heritage Site.

In Sanskrit word, Bukhara signifies “monastery” and this city was once a large commercial centre on the Great Silk Road.

Bukhara is an ancient settlement with history that goes back to the early centuries A.D. In the 6th century it became the capital of early feudal lands of the Bukhara oasis.

As the Shakhristan, the centre of a shah’s realm, it was formed around an ancient citadel, but with the development of handicrafts and trade, new suburbs (rabads) arose beyond its walls those were included with the Shakhristan in a new fortified wall Bukhara with more than 140 architectural monuments is a “town museum” dating back to the middle Ages.

Famous poets like Rudaki and scientist Avicenna were well known in Bukhara as they played important roles in the development of the country. Monuments like the Maggoki-Attori, Namazgoh mosque and Chashma-I-Ayub were witnesses to this particula

The history of Bukhara stretches back millennia.  Located on the Silk Road, the city has long been a center of trade, scholarship, culture, and religion. During the golden age of the Samanids,  Bukhara became a major intellectual center of the Islamic world, second only to Baghdad. The historic center of Bukhara, which contains numerous  mosques  and madrassas, has been listed by UNESCO as one of the World Heritage Sites.

Bukhara has been one of the main centres of world civilisation from its early days in 6th century BCE. From the 6th century CE, Turkic speakers gradually moved in. Its architecture and archaeological sites form one of the pillars of Central Asian history and art. The region of Bukhara was a part of the Persian Empire for a long time. The origin of many of its current inhabitants goes back to the period of Aryan immigration into the region.

The Samanid Empire seized Bukhara, the capital of Greater Khorasan, in 903.  Genghis Khan besieged Bukhara for fifteen days in 1220.  As an important trading centre, Bukhara was home to a community of medieval Indian merchants from the city of Multan (modern-day Pakistan) who were noted to own land in the city.

Bukara on the Silk Road

While under Samanid control, Bukhara was a rival to Baghdad in its glory.. The Samanids promoted the arts, giving rise to the advancement of science and literature, and thus attracted scholars such as Rudaki, Ferdowsi, and Avicenna. The Samanid Empire, also known as the Samanian Empire, Samanid dynasty, Samanid Emirate, or simply Samanids, was a Sunni Iranian empire,  centered in Khorasan and Transoxiana during its existence; at its greatest extent, the empire encompassed all of today’s Afghanistan, large parts of Iran, Tajikistan, Turkmenistan, Uzbekistan, Kyrgyzstan, and parts of Kazakhstan and Pakistan.

The Samanid state was founded by four brothers; Nuh, Ahmad, Yahya, and Ilyas—each of them ruled their own territory under Abbasid suzerainty. In 892, Isma’il ibn Ahmad (892–907) united the Samanid state under one ruler, thus effectively putting an end to the feudal system used by the Samanids. It was also under him that the Samanids became independent of Abbasid authority.

The Samanid Empire is part of the Iranian Intermezzo, which saw the creation of a Persianate culture and identity that brought Iranian speech and traditions into the fold of the Islamic world. This would lead to the formation of the Turko-Persian culture.

What to See in Bukara

The Samanid mausoleum is located in a park just outside the historic urban center of Bukhara, Uzbekistan. The mausoleum is considered to be one of the most highly esteemed works of Central Asian architecture, and was built between 892 and 943 CE as the resting-place of Ismail Samani – a powerful and influential amir of the Samanid dynasty, one of the last native Persian dynasties that ruled in Central Asia in the 9th and 10th centuries, after the Samanids established virtual independence from the Abbasid Caliphate in Baghdad. In addition to Ismail Samani, the mausoleum also houses the remains of his father Ahmed and his nephew Nasr, as well as the remains of other members of the Samanid dynasty. 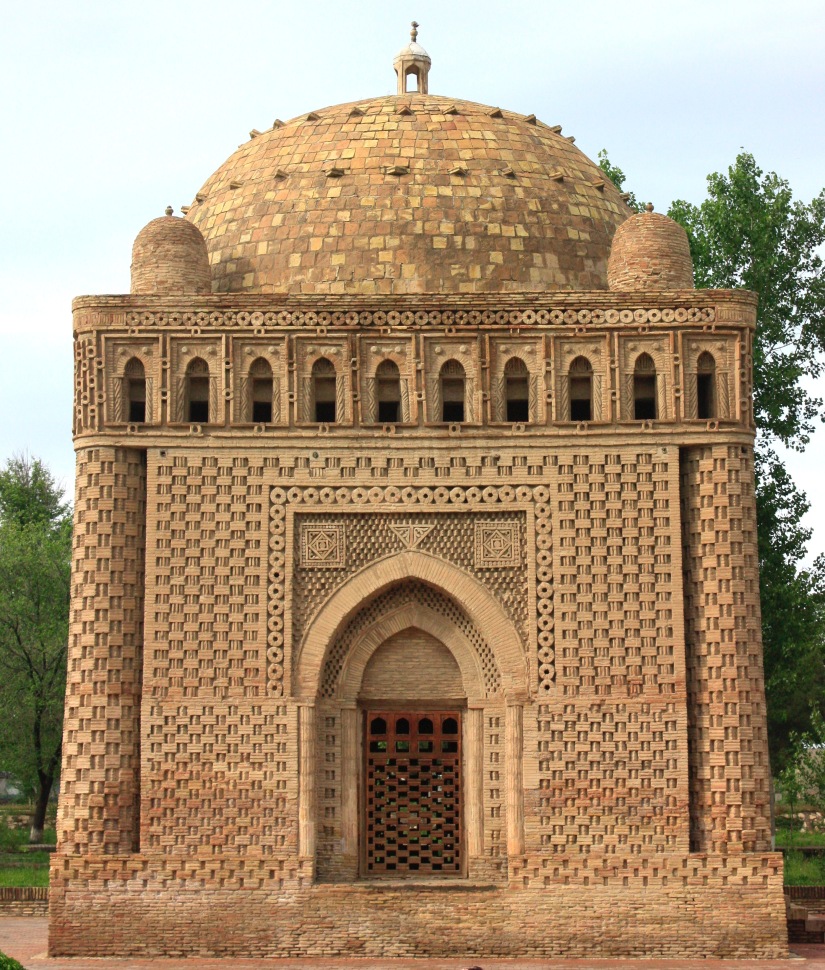 Religious law of orthodox Sunni Islam strictly prohibits the construction of mausoleums over burial places.  The Samanid mausoleum might be one of the earliest departures from that orthodox religious restriction in the history of Islamic architecture. It is also  the most ancient monument of Islamic architecture in Central Asia and the sole monument that survived from the epoch of the Samanid Dynasty.

At the time of Genghis Khan’s invasion, the shrine was said to have already been buried in mud from flooding and was spared from destruction by the Mongol hordes. The site was only rediscovered in 1934 by Soviet archeologist V.A. Shishkin, and required two years for excavation.

During the Soviet era, the local cemetery was paved over, and an amusement park was built immediately adjacent to the shrine which is still in operation. A park was also built to completely surround the shrine.

The monument marks a new era in the development of Persian and Central Asian architecture, which was revived after the Arab conquest of the region. The overall structure is made similar to ancient Persian fire temples, commonly known as chartaqi in Persian. The architects continued to use an ancient tradition of baked brick construction, but to a much higher standard than had been seen before. The site is unique for its architectural style which combines both Zoroastrian motifs from the native Sogdian and Sassanid cultures, as well as Islamic motifs introduced from Arabia and Persia.

The building’s facade is covered in intricately decorated brick work, which features circular patterns reminiscent of the sun – a common image in Zoroastrian art from the region at that time which is reminiscent of the Zoroastrian god, Ahura Mazda, who is typically represented by fire and light. The building’s shape is cuboid, and reminiscent of the Ka’aba in Makkah, while the heavy corner buttresses are derived from Sogdian architectural styles. The syncretic style of the shrine is reflective of the 9th and 10th centuries – a time when the region still had large populations of Zoroastrians who had begun to convert to Islam around that time.

The height of the shrine is approximately 35 feet, with four identically designed facades which gently slope inwards with increasing height. The building’s architectural engineers included four internal arches for support, upon which the dome is placed. The building’s “four arch” design was adopted for use in several shrines throughout Central Asia. At the top of each side of the shrine are ten small windows which provided ventilation for the interior portion of the mausoleum.

The title Po-i Kalan belongs to the architectural complex located at the base of the great minaret Kalân.

Kalyan minaret. More properly, Minâra-i Kalân, (Persian/Tajik for the “Grand Minaret”). Also known as the Tower of Death, as according to legend it is the site where criminals were executed by being thrown off the top for centuries. The minaret is most famed part of the ensemble, and dominates over historical center of the city. The role of the minaret is largely for traditional and decorative purposes—its dimension exceeds the bounds of the main function of the minaret, which is to provide a vantage point from which the muezzin can call out people to prayer. For this purpose it was enough to ascend to a roof of mosque. This practice was common in initial years of Islam. The word “minaret” derives from the Arabic word “minara” (“lighthouse”, or more literally “a place where something burn”). The minarets of the region were possible adaptations of “fire-towers” or lighthouses of previous Zoroastrian eras. The architect, whose name was simply Bako, designed the minaret in the form of a circular-pillar brick tower, narrowing upwards. The diameter of the base is 9 meters (30 feet), while at the top it is 6 m (20 ft). s 45.6 m (150 ft) high, and can be seen from vast distances over the flat plains of Central Asia. 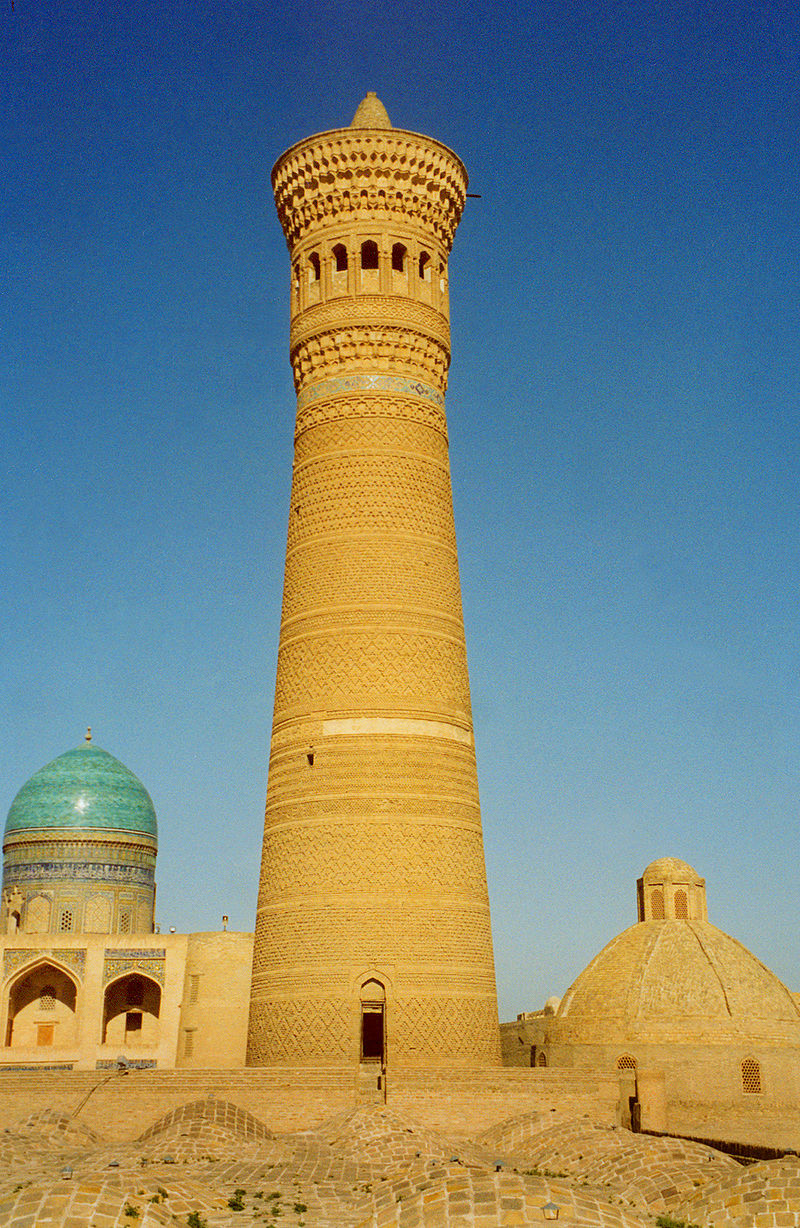 Kalân Mosque (Masjid-i Kalân), arguably completed in 1514, is equal to the Bibi-Khanym Mosque in Samarkand in size. The mosque is able to accommodate twelve thousand people. Although Kalyan Mosque and Bibi-Khanym Mosque of Samarkand are of the same type of building, they are different in terms of art of building. Two hundred and eighty-eight monumental pylons serve as a support for the multi-domed roofing of the galleries encircling the courtyard of Kalyan Mosque. The longitudinal axis of the courtyard ends up with a portal to the main chamber (maksura) with a cruciform hall, topped with a massive blue cupola on a mosaic drum. The edifice keeps many architectural curiosities, for example, a hole in one of domes. Through this hole one can see foundation of Kalyan Minaret. Then moving back step by step, one can count all belts of brickwork of the minaret to the rotunda.

The Ark of Bukhara is a massive fortress located in the city of Bukhara, Uzbekistan that was initially built and occupied around the 5th century AD. In addition to being a military structure, the Ark encompassed what was essentially a town that, during much of the fortress’ history, was inhabited by the various royal courts that held sway over the region surrounding Bukhara. The Ark was used as a fortress until it fell to Russia in 1920. Currently, the Ark is a tourist attraction and houses museums covering its history

Char Minor (the Madrasah of Khalif Niyaz-kul) is a building tucked away in a lane northeast of the Lyabi Hauz complex. The structure was built by Khalif Niyaz-kul, a wealthy Bukharan of Turkmen origin in the 19th century under the rule of the Janid dynasty. The four-towered structure is sometimes mistaken for a gate to the madras that once existed behind the structure; however, the Char-Minar is actually a complex of buildings with two functions, ritual and shelter. 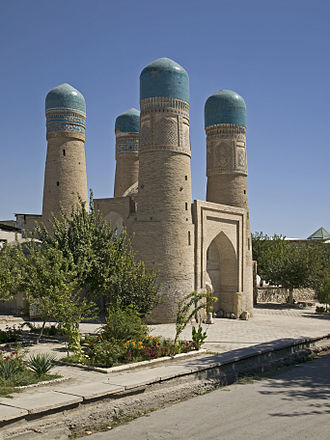 The main edifice is a mosque. In spite of its unusual outward shape, the building has a typical interior for a Central Asian mosque. Owing to the buildings cupola, the room has good acoustic properties and therefore takes on special significance of ‘dhikr-hana’—a place for ritualized ‘dhikr’ ceremonies of Sufi, the liturgy of which often include recitation, singing, and instrumental music.

On either side of the central edifice are located dwelling rooms, some of which have collapsed, leaving only their foundations visible. Consequently, for full functioning of madrasah only of classroom and some utility rooms is lacking. However, it was common practice that so-called madrasahs had no lecture rooms or, even if they had, no lectures had been given in them. These madrasahs were employed as student hospices.

Each of four towers have different decorational motifs. Some say that elements of decoration reflect the four religions known to Central Asians. One can find elements reminiscent of a cross, a Christian fish motif, and a Buddhist praying-wheel, in addition to Zoroastrian and Islamic motifs.

On the esplanade to the right from Char-Minar is a pool, likely of the same age as the rest of the building complex. Char Minar is now surrounded mainly by small houses and shops along its perimeter