Historically inhabited by the Indo-Iranians, the written history of  Uzbekistan, Tajikistan, and Turkmenistan begins with its annexation by the Achaemenid Empire of Ancient Iran.  The Achaemenid Empire, also called the First Persian Empire, was an empire based in Western Asia,  founded by Cyrus the Great.

At that time the Turkic peoples who live in the “stans” today, were far to the northern steppes.

Maracanda is the Greek name for today’s Samarkand, but the real name in antiquity was Afrasiab and you can still visit its remains today.

King Cyrus the Great founded the city of Cyropolis  during his last expedition against the Saka tribe of Massagetae shortly before his death un the western Fergana Valley in 550 BCE.   Alexander the Great conquered  Cyropolis in 329 BCE and built his furthest Greek settlement nearby and named it Alexandria Eschate “Alexandria The Furthest”. Today it the primarily Uzbkek town of Khujand. in Tajikistan.

By the 5th century BC the Kings of Persia were either ruling over or had subordinated territories encompassing not just all of the Persian Plateau and all of the territories formerly held by the Assyrian Empire (Mesopotamia, the Levant, Cyprus and Egypt), but beyond this all of Anatolia and Armenia, as well as the Southern Caucasus and parts of the North Caucasus, Azerbaijan, Uzbekistan, Tajikistan, Turkmenistan all of Bulgaria, Paeonia, Thrace and Macedonia to the north and west, most of the Black Sea coastal regions, parts of Central Asia as far as the Aral Sea.

The Achaemenid Empire expanded  east and north as far as the Oxus  today’s Amu Daryai River in Uzbekistan,   Tajikistan, Turkmenistan  and  Afghanistan,   in  and  the Jaxartes today’s  Syr Darya River  in Kyrgyzstan, Uzbekistan, Tajikistan,  and Kazakhstan to the north and north-east.

Impact of the Achaemenid Empire

Ranging at its greatest extent from the Balkans and Eastern Europe proper in the west to the Indus Valley in the east, it was larger than any previous empire in history, spanning 5.5 million square kilometers. Incorporating various peoples of different origins and faiths, it is notable for its successful model of a centralised, bureaucratic administration (through satraps under the King of Kings), for building infrastructure such as road systems and a postal system, the use of an official language across its territories, and the development of civil services and a large professional army. The empire’s successes inspired similar systems in later empires.

By the 7th century BC, the Persians had settled in the southwestern portion of the Iranian Plateau in the region of Persis,  which came to be their heartland.  From this region, Cyrus the Great advanced to defeat the Medes, Lydia, and the Neo-Babylonian Empire, establishing the Achaemenid Empire. 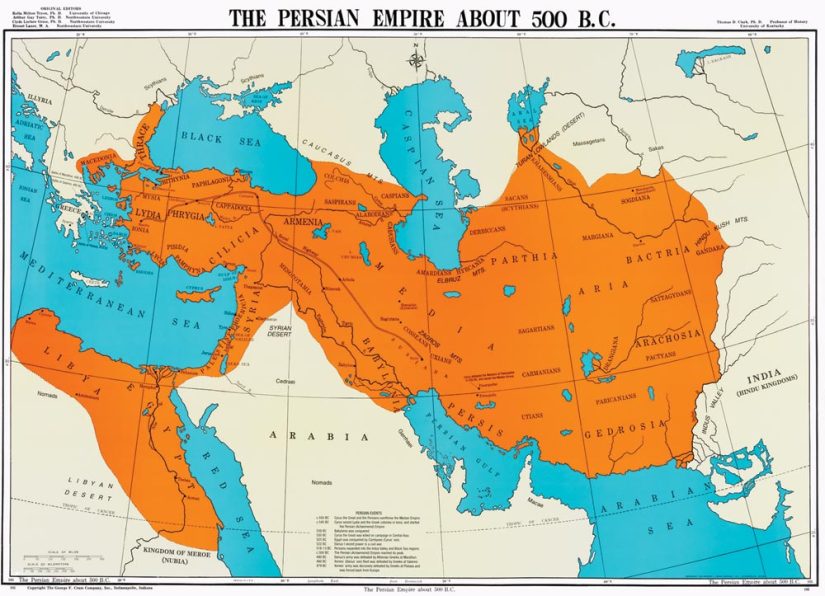 Alexander the Great, an avid admirer of Cyrus the Great,  conquered most of the empire by 330 BC.

Upon Alexander’s death, most of the empire’s former territory came under the rule of the Ptolemaic Kingdom and Seleucid Empire, in addition to other minor territories which gained independence at that time. The Iranian elites of the central plateau reclaimed power by the second century BC under the Parthian Empire.

We know the Achaemenid Empire in the West as the antagonist of the Greek city-states during the Greco-Persian Wars and for the emancipation of the Jewish exiles in Babylon.

The empire was instrumental in the spread of Zoroastrianism as far east as China. The empire also set the tone for the politics, heritage and history of modern Iran.

Maracanda is the Greek name for today’s Samarkand, but the real name in antiquity was Afrasiyab and Iand was  important city in Alexander’s relentless marches up and down Central Asia. It is here that he murdered Cleitos and it is here that he received the head of Spitamenes

Afrasiyab occupies 220 hectares mostly hidden beneath an 8 to 12 meter thick layer of soil, with at the very bottom “the adobe houses of the Sogdians” as mentioned in the Avesta. Since the end of the 19th century, periodic excavations have taken place, mostly by Russian archaeologists who moved the most precious finds to the Hermitage Museum in St Petersburg; lesser items went to a newly built adjacent museum.

Cyropolis was the largest of seven towns in the region that Alexander the Great targeted for conquest in 329 B.C. His goal was the conquest of Sogdiana. Alexander first sent Craterus to Cyropolis, the largest of the towns holding Sogdiana against Alexander’s forces.

Craterus’ instructions were to “take up a position close to the town, surround it with a ditch and stockade, and then assemble such siege engines as might suit his purpose….” The idea was to keep the inhabitants focused on their own defenses and to prevent them from sending assistance out to the other towns. Starting from Gazza (Tajikiistan), Alexander went on to conquer the other surrounding towns.

Five of the seven towns were taken in two days. Many of the inhabitants were killed. Alexander then arrived at Cyropolis, which was the best fortified of the towns and had the largest population. It also had reputedly the best fighters of the region. Alexander battered Cyropolis’ defenses with the siege engines. While the bombardment went on, Alexander ordered certain of his troops to sneak through a dried-up water course that went under the town’s wall. Alexander also joined on this mission and once inside his troops opened the town’s gate to admit his attacking force.

Once the natives saw that the town was taken, they fell violently upon the attackers. Alexander received a violent blow from a stone that landed upon his head and neck. Craterus was wounded by an arrow. But the defenders were driven off.

Arrian puts the defender’s force at about 15,000 fighting men and claims that 8,000 of them were killed in the first phase of the operation. The rest apparently sought refuge inside the town’s central fortress, but surrendered after one day for lack of water.

Accounts of how the battle went down differ among authors. Arrian cites Ptolemy as saying Cyropolis surrendered from the start, and Arrian also states that according to Aristobulus of Cassandreia  the place was stormed and everyone was massacred.

The Anabasis of Alexander by Arrian is considered the best source on the campaigns  of Alexander the Great.   Arrian of Nicomedia (Latin: Lucius Flavius Arrianus)  (86/89 CE – c. after 146/160 CE)  was a Greek historian, public servant, military commander and philosopher of the Roman period.

Arrian’s chief sources in writing the Anabasis were the lost contemporary histories of the campaign by Ptolemy and Aristobulus and, for his later books, Nearchus.   One of Arrian’s main aims in writing his history seems to have been to correct the standard “Vulgate” narrative of Alexander’s reign that was current in his own day, primarily associated with the lost writings of the historian Cleitarchus.