The Ancient Kyrgyz, also known as the Yensei Kyrgyz or the Khyagas (Khakas), were an ancient Turkic people who dwelled along the upper Yenisei River in the southern portion of the Minusinsk Depression  in South Siberia from the 3rd century BCE to the 13th century CE.

The heart of their homeland was the forested Tannu-Ola mountain range (known in ancient times as the Lao or Kogmen mountains), in modern-day Tuva, just north of Mongolia. The Sayan mountains were also included in their territory at different times.

The Kyrgyz Khaganate existed from 550 to 1219 CE; in 840, it took over the leadership of the Turkic Khaganate from the Uyghurs, expanding the state from the Yenisei territories into the Central Asia and Tarim basin. The Yenisei Kyrgyz mass migration to the Jeti-su resulted in the formation of the modern Kyrgyz Republic, land of the modern-day Kyrgyz.

According to recent historical findings, Kyrgyz history dates back to 201 BE.  The Yenisei Kyrgyz may perhaps be correlated to the Tashtyk culture.  They were known as Jiegu  or Xiajiasi in Chiinese historical texts, but first appeared as Gekun  or Jiankun n Han period records. By the fall of the Gokturk empire in the eighth century CE, the Yenisei Kirghiz had established their own thriving state based on the Gokturk model. They had adopted the Orkhon script of the Gokturks and established trading ties with China and the Abbasid Caliphate in Central Asia and Middle East.

The Kyrgyz Khagans of the Yenisei Kirghiz Khaganate claimed descent from the Chinese general Li Ling, grandson of the famous Han Dynasty general Li Guang. Li Ling was captured by the Xiongnu and defected in the first century BCE. And since the Tang royal Li family also claimed descent from Li Guang, the Kirghiz Khagan was therefore recognized as a membesr of the Tang Imperial family. Emperor Zhongzong of Tang had said to them:

“Your nation and Ours are of the same ancestral clan (Zong). You are not like other foreigners.”

In 758, the Uyghurs killed the Kirghiz Khan, and the Kirghiz came under the rule of the Uyghur Khaganate. However, the Yenisei Kyrghyz spent much of their time in a state of rebellion. In 840 they succeeded in sacking the Uyghur capital, Ordu-Baliq in Mongolia’s Orkhon Valley, and driving the Uyghurs out of Mongolia entirely.

On February 13 843 at “Kill the Foreigners” Mountain, the Tang Chinese inflicted a devastating defeat upon the Uyghur Qaghan’s forces. But rather than replace the Uyghurs as the lords of Mongolia, the Yenisei Kirghiz continued to live in their traditional homeland and exist as they had for centuries. The defeat and collapse of the Uyghur Khaganate triggered a massive migration of Uyghurs from Mongolia into Turfan, Kumul, and Gansu where they founded the Kingdom of Qocho and Gansu Uyghur Kingdom.

When Genghis Khan came to power in the early 13th century, the Yenisei Kirghiz submitted peacefully to him and were absorbed into his Mongol Empire, putting an end to their independent state. During the time of the Mongol Empire, the territory of the Yenisei Kirghiz in northern Mongolia was turned into an agricultural colony called Kem-Kemchik. Kublai Khan, who founded the Yuan Dynasty, also sent Mongolian and Chinese officials (along with colonists) to serve as judges in the Kyrgyz and Tuva regions.

Some of the Yenisei Kirghiz were relocated into the Dzungar Khanate by the Dzungars. In 1761, after the Dzungars were defeated by the Qing, some Öelet, a tribe of Oirat-speaking Dzungars, were deported to Nonni basin in Northeastern China (Manchuria), and a group of Yenisei Kirghiz were also deported along with the Öelet.   The Kirghiz moved to northeastern China became known as the Fuyu Kyrgyz, but they have now mostly merged with the Mongol and Chinese population.

The descendants of the Yenisei Kirghiz today are the Kyrgyz, Khakas, and Altai peoples.

A Turkic people, who live in Russia, in the republic of Khakassia in southern Siberia. They speak the Khakas language.

It is believed that the Khakas people and Fuyu Kyrgyz are closer to the ancient Yenisei Kirghiz, who are both Siberian Turkic peoples (Northeastern Turkic), rather than the Kyrgyz people of modern Kyrgyzstan, who are Kipchak Turkic people (Northwestern Turkic).

A Turkic people living in the Siberian Altai Republic and Altai Krai. 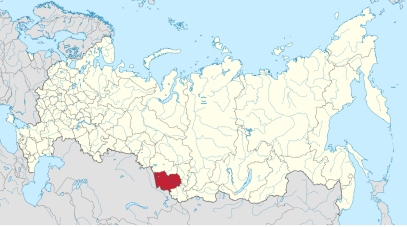 The Northern and Southern Altayans formed in the Altay area on the basis of tribes of Kimek-Kipchaks.

Culturally and linguistically, the Yenisei Kirghiz were Turkic. The Kirghiz were described in Tang Dynasty texts as having primarily Caucasian features, with some having East Asian features.   According to the Tang Huiyao (961 CE) article on Jiegu (the Kirghiz), which very likely comes from the Xu Huiyao that Yang Shaofu and others completed in 852, citing Ge Jiayun, who was the Protector General of Anxi

During the reign period of Kaiyuan of [emperor] Xuanzong, Ge Jiayun, composed A Record of the Western Regions, in which he said “the people of the Jiankun state all have red hair and green eyes. The ones with dark eyes were descendants of Li Ling.

It further mentioned that the name “Xiajiasi”, by which the Kirghiz were then known, was what the Uyghurs called them and had the meaning “yellow head and red face”, although confusingly it was also a name Kirghiz themselves used. Since the Turks were being described as people of small stature in the Tangshu, the description of the Kirghiz as tall, blue-eyed blonds excited the early interest of scholars, who assumed that they could not have originally been Turkic in language.

Ligeti cited the opinions of various scholars who had proposed to see them  as Germanic, Slav, orKet, while he himself, favoured a Samoyed origin on the basis of an etymology for a supposed Kirghiz word qaša or qaš for “iron”.

As far as I can see the only basis for the assumption that the Kirghiz were not originally Turkic in language is the fact that they are described as blonds, hardly an acceptable argument in the light of present day ideas about the independence of language and race. As Ligeti himself admitted, other evidence about the Kirghiz language in Tang sources shows clearly that at that time they were Turkic speaking and there is no earlier evidence at all about their language. Even the word qaša or qaš may, I think, be Turkic. The Tongdian says: “Whenever the sky rains iron, they gather it and use it. They call it jiasha (LMC kiaa-şaa). They make knives and swords with it that are very sharp.” The Tang Huiyao is the same except that it leaves out the foreign word jiasha. “Raining iron” must surely refer to meteorites. The editor who copied the passage into the Xin Tangshu unfortunately misunderstood it and changed it to, “Whenever it rains, their custom is always to get iron,” which is rather nonsensical. Ligeti unfortunately used only the Xin Tangshu passage without referring to the Tongdian. His restoration of qaša or qaš seems quite acceptable but I doubt that word simply meant “iron”. It seems rather to refer specifically to “meteorite”

A number of researchers have been tempted to see the early Kyrgyz as a non-Turkic people or, at the very least, an ethnically mixed people with a large non-Turkic component. Many scholars have supported this idea after identifying what they believe to be examples of non-Turkic (particularly Samoyed) words among the Kyrgyz words preserved in Chinese sources. It should be noted, however, that the connection between language and “race” is highly inconclusive. The physical appearance of the Kyrgyz can no more be considered as indicating that they were not a Turkic people than can the lexical appearance of a few possibly non-Turkic words, whose presence in the Kyrgyz language can be explained through the common practice of linguistic borrowing. The Kyrgyz inscriptions of the Yenisei (eighth century CE and later) are in fact written in a completely Turkic language, and T’ang Chinese sources state clearly that the Kyrgyz written and spoken language at that time was identical to that of the Turkic Uygurs (Chinese Hui-ho, Hui-hu). Most of the Kyrgyz words preserved in Chinese sources are, in fact, Turkic. There is no reason to assume a non-Turkic origin for the Kyrgyz, although that possibility cannot be discounted.

The Yenisei Kirghiz had a mixed economy based on traditional nomadic animal breeding (mostly horses and cattle) and agriculture. According to Chinese records, they grew Himalayan rye, barley, millet, and wheat.

They were also skilled iron workers, jewelry makers, potters, and weavers. Their homes were traditional nomadic tents and, in the agricultural areas, wood and bark huts. Their farming settlements were protected by log palisades.

The resources of their forested homeland (mainly fur) allowed the Yenisei Kirghiz to become prosperous merchants as well. They maintained trading ties with China, Tibet, the Abbasid Caliphate of the Middle east, and many local tribes.

Kirghiz horses were also renowned for their large size and speed.

The tenth-century Persian text Hudud al-‘alam described the Kirgiz as people who “venerate the Fire and burn the dead”, and that they were nomads who hunted.